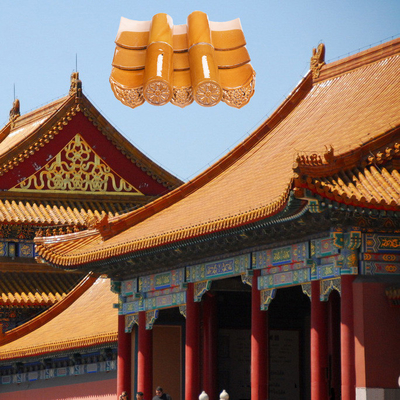 We are the special factory in China to supply traditional Chinese roof tiles .There are glazed tiles with colors

Yellow glazed tiles were reserved for use on the roofs of imperial palaces, mausoleums,

imperial gardens and temples. This, it is said, was because yellow is the color of the

Yellow River, which was believed to be the cradle of the Chinese civilization. Yellow,

therefore, was taken as the cardinal color and became the imperial color to be used exclusively

in the house. Even in the same part, for example the Summer Palace of Beijing, different colored

tiles were used for different houses. The groups of halls and pavilions used by the monarch and

his family have yellow roofs. Whereas the house for the officials have green roofs. As for other

structures for landscaping or for the accommodation of people without a senior rank, they have as

For Mosque in Malaysia

For garden pavilion in Germany

2. our engineer can guide the installation at the site if necessary.

3. if any quality problem ,we promise to provide free products to replace.

1.Our factory is a professional roof tiles manufacturer for over 30 years.

2. We supply many types of roof tiles including traditional Chinese glazed roof tiles ,

3. We have experienced professionals which work for roof design ,manufacture, installation

That’s why you can choose us.